This post is the beginning of a series on my journey with the German language. I call it a journey because language learning has been part of my life in Austria as an immigrant for 10 years. My learning experience is not as straightforward as which of the students who get a block of time in life, maybe a year or even two, to acquire the language. But I suppose no matter why you choose to learn the language or how fast your progress is, most of the German learners have gone through some mental struggles and technical difficulties in the process. Therefore what I hope to achieve with this blog series is that my experience from zero to C1 could encourage you, aspired or frustrated German learners, to find your own path with the language.

So, sit tight. It took me 10 years to come this far. It shouldn’t be a surprise to anybody if it takes me several weeks or months to finish writing this series.

I arrived in Austria on 28.09.2008 to take an academic job. I didn’t know where that job would lead me. Nor did I know how much it would change my life in the future. And I certainly didn’t know I would one day acquire a second foreign language. In fact, I hadn’t put much thought on these things. I was merely trying to adapt to the new environment and deliver on my new job. Once I felt a bit settled down, the necessity of at least knowing some of the local language had become clear.

I started with a free course on Deutsche Welle, the Warum nicht? series. The units are small and time spent on each unit is controllable. If I had enough energy left after a day of work, I could finish one unit in the evening. It was both exciting and confusing. Exciting because I was learning something new. Confusing because, well, it’s German. There were so many unanswered questions. Why are there three definite articles? Why do they have so many forms? Why is the feminine definite article the same as the plural article while the feminine definite article in dative is the same as the masculine one? The whole idea that every word could be declined in a simple article-adjective-noun combination like “the big apple” was just alien. This might not be the case for many European learners. But my mother tongue is not even in the Indo-European language family. The first obstacle for me to learn these languages is to accept that these concepts exist. That reminded me of the time when I started learning English in China at the age of 12. It was also very difficult to mentally accept the fact that there is something called tense.

After finishing Series 1 of the “Warum nicht?”, I knew I couldn’t continue with it. I registered to an A1 course. My job as a young foreign academic was demanding and I had to travel frequently. I could only take the evening course, twice a week, 2 course units every time. The teacher was very good and helpful. Classmates were nice and we had lots of fun. It was far more motivating than learning from a book alone. I tried my best to give some time to German in the evenings and on weekends if I was not working overtime. Sometimes I had to bring German homework with me on business trips. It must be strange for other fellow European passengers to see an Asian guy dressed in casual business style doing pupil’s homework in flight.

During the course, other than accumulating the knowledge about the language itself, I have also got the most important piece of advice on learning German. I was known for asking questions and making quick remarks in class since I was a kid. In the course I wanted to get answers to all the questions I had when I was studying by myself. This were finally put to a stop as the teacher told me in class: “Frag nicht warum! Es ist Deutsch!”. She was totally right. It was not useful to ask why when learning German, at least not at that early stage. I think some linguistic knowledge on how languages evolved could certainly help but that was not for the A1/A2 level. Once I accepted that rules are random and exceptions are norm in German, it became much easier for me to learn the peculiarities of the language.

Eventually I finished the A2 course and took the free exam at the institute. The grades were excellent. And if I recall correctly the exam report issued by the institute at the time was accepted by the immigration to change my visa type from work permit to residence permit. But in terms of language competence, other than knowing some basic concepts and words, I didn’t feel like I could use the language anyhow. In real conversations with Austrians the Austrian accent was a huge obstacle, because in the language course only Hochdeutsch was taught. And BTW my working environment was international. Everybody could speak English in office. 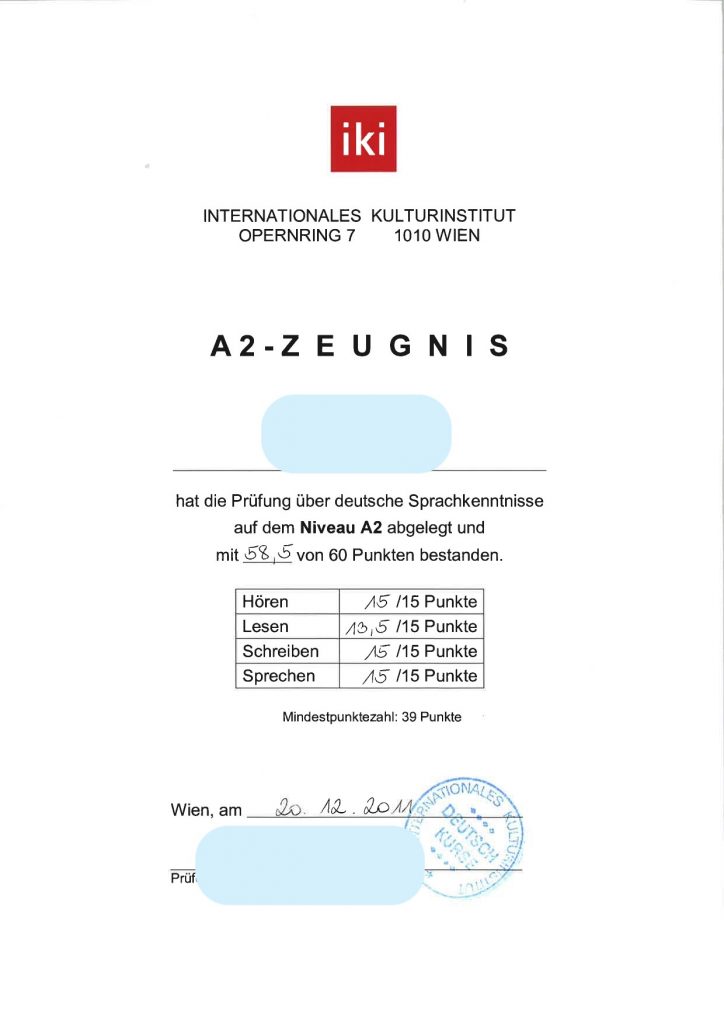 As I was checking my past grades to write this post, I was surprised that I took the A2 exam more than 3 years after I had started in Austria. I don’t remember how many pauses I have taken between A1.1 and A2.2. Maybe there was also an A2 Plus course. What I do remember is that it was a very difficult time career-wise. My adaption to the European academic environment was not successful. I couldn’t see a future in Europe. But a more promising project was coming, and my wife had moved to Vienna. So we decided to hold on and give Austria another try.

Since A2 was obviously not enough for anything practical and it looked like I would stay in Vienna for another couple of years, I continued to the B1 course. It took me another year to finish B1. Again the exam was not official but it was enough to extend my visa. Afterwards I could manage to speak German to the immigration officers and handle most of the basic conversations on phone with utilities and insurances. I could also partially understand the letters from various ministries and businesses. 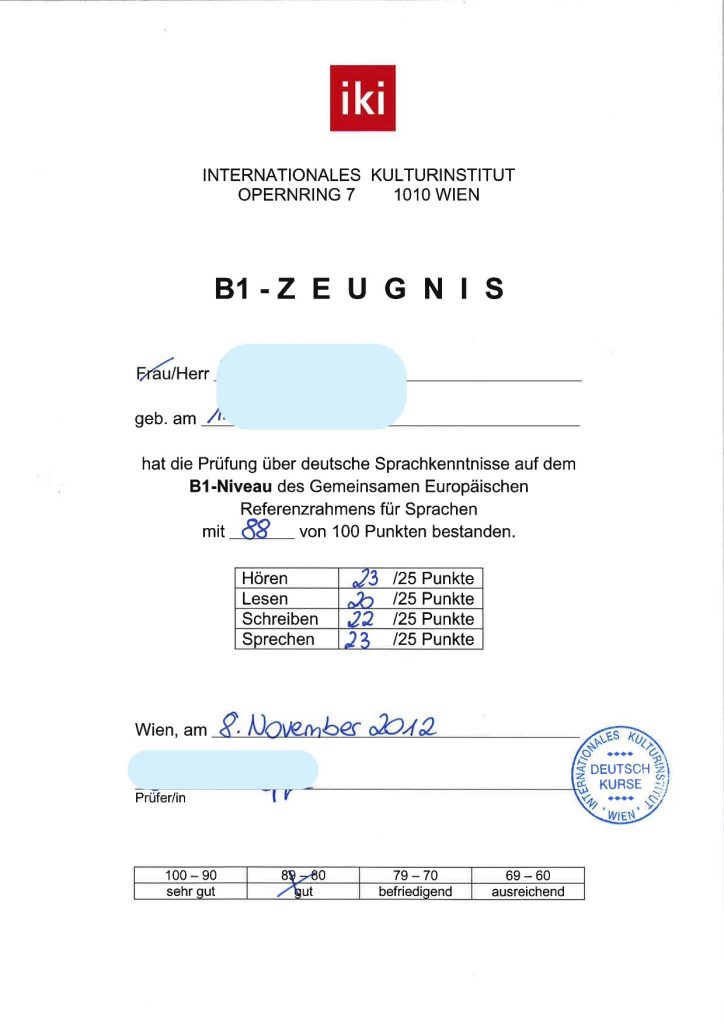 There were not many memorable moments during the B1 course. The learning experience was very similar to A1/A2. But I still remember the last lecture of the B1 course was called “Erdäpfel bleibt Erdäpfel”. It was a lecture about the differences between Austrian German and standard German. There was a list of Austrian words that are not often used in most parts of Germany, like Erdäpfel,  Käsekrainer and Paradiser. In official EU documents the Austrian translation is differentiated from the German translation by these words. It was a greatly useful lecture to get into Austrian German. But in the actual spoken language, the difference is much more significant than this list of words.

After B1 there was another long hiatus, again influenced by my professional life. It’s difficult to put up the effort to learn the language of a country when I didn’t know if I was going to stay in the country.

The takeaways for zero to B1 level

In the next post I will write about my experience with learning German at the B2 level, which will be a very different story to this one.

This site uses Akismet to reduce spam. Learn how your comment data is processed.